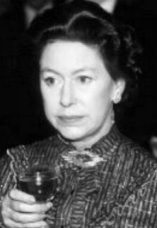 Princess Margaret, the youger sister of the Queen has died in her drug induced sleep in the early hours of this morning.

Yesterday she suffered her 4th stroke and was rushed to hospital. She developed a serious heart condition and died, thank fuck. She was a bright bird who has lived in the shadow of her thick elder sister throughout her sad life. She was unlucky in love who refused to marry her first shag ,Townsend, marrying a philandering photographer instead. She played away herself and indulged in a life of drugs,booze and young studs. She has been in fancy dress for the last 6 months and must be congratulated for her fine sense of humour playing the character of Connie Booth playing Sybil in that great episode of Fawlty Towers.

Today is a great day for deathleague and the Quincy household, her death a source of much celebration.